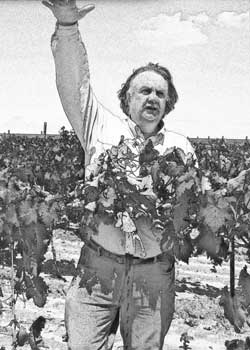 Bobby Cox is a larger-than-life character both in stature and reputation among grape growers and winemakers. He’s something like a Texas version of Paul Bunyan, and Neal Newsom’s large blue grape harvester parked beside him appeared as the mechanical equivalent of Bunyan’s large blue ox, Babe. While Bunyan was a legendary lumberman in the American northland, Bobby’s a bona fide virtuoso of grape growing here in the Southwest.

Bobby was beaming, bright eyed with an ear-to-ear smile. You could see that this was not just any bottle of wine by the manner he and his wife, Jennifer, cradled it as they brought it to the table. The bottle was labeled 1982 Pheasant Ridge Cabernet Sauvignon, but it obviously contained something so much more than wine.

Pheasant Ridge Winery, with its estate vineyard in the Lubbock area, was once Bobby’s baby. The vineyard he planted in the 1970s is one of the oldest in Texas, with sixty acres of Cabernet Sauvignon, Merlot, Cabernet Franc, Pinot Noir, Chardonnay, Chenin Blanc, and Semillon.

Order a copy autographed by the author, Russ Kane, at:

← Deep Roots in Texas
Sun on the Skins →